Someone, back in my university days, made a comment in a class that 1+1 only exceptionally equals 2 (such as in mathmatics), but in the real world it rarely equals 2 (for example a household of one man and one woman often end up being 3 or 4 or even more). I cannot remember what kind of class that was, and who made that comment, but that comment stuck in my memory.

But that’s off the topic. What I wanted to say in the title of this entry is that since 2 weeks ago, our little household of three officially houses 1 Chinese, 2 French, and 2 Australian. Hence 2 + 2 + 1 = 3! 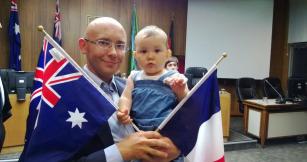 Nicolas has got his Australian citizenship, so he’s finally caught up with his daughter on the citizenship tally. Nina was born both Australian and French just in case you are wondering.

I, on the other hand, faithfully keep going as a Chinese passport holder (although I was, and still am, eligible for citizenship). Not that I haven’t thought of the option, but I somehow still cannot really convince myself, yet, to give up on my native country’s citizenship and claim myself 100% a citizen of another country. If only Chinese government would recognize double nationality! Maybe one day … maybe…

So we three all went to the citizenship ceremony for Nicolas’ becoming Aussie, which was organized by the council that we belong to – Ku-ring-gai council (isn’t it a cool name, do you even know how to pronounce it??). Every new citizen is allowed to bring 2 guests along. We were so surprised to find the amount of people in the room – to use a Chinese term it was ‘people mountain people sea’. Well, it must be a prosperous business to convert people into Australian.

Ku-ring-gai lord mayor is a lady in her 50s (i guess, and I’m never good at guessing others’ age, so I might be totally wrong). She presided the ceremony. She spoke with a lively and soft voice that I almost felt it was an opening ceremony of the primary school. Anyway, flags were paraded, speeches were made, jokes were told, congratulations were said, song were sung, certificates were handed out, a native plant were offered to each new aussie (Nicolas complained that he got the smallest one!!), photos were taken (I was the honorable photographer/camera woman while all the time trying to calm down a tired/hungry Nina. She behaved, thank goodness), and drinks were served.

And Nicolas is an Australian. I wonder if that really makes advance the Australian fair though 🙂

What’s for sure though, now he has to think hard who to vote in coming September.