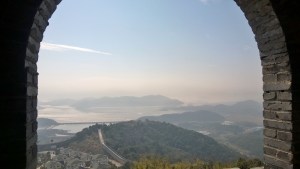 Nina and I spent the last evening of 2014 and the first 16 days of 2015 in China. It’s the first girls-only trip (as the dad had to stay behind to work. Merc !). I was very pleased with it, although I traded the sunny summer of Sydney into the bitter winter of Shanghai/Ningbo. 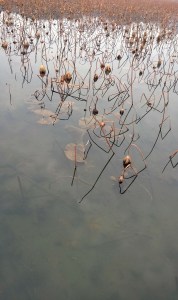 As it was a last-minute decision (literally I booked the tickets two days before the departure) and my main goal was for Nina and my family/extended family to spend some time together, I didn’t plan much. It turned out to be the best plan.

Nina’s Mandarin really took off during the trip. Prior to our trip, her Mandarin was not as strong as her French – she understood all that I said but would reply in French most of time. Why? Because she heard much more French than Mandarin (double at least) at that time. (side note: so quantity does matter.)During the first week in China, I noticed her Mandarin vocabulary started to increase. By Week two, she was speaking Mandarin 99% of time, although still with some interesting accent (like the accent of an adult foreigner speaking Mandarin 🙂 Could she have picked up from her dad?). Immersion is very powerful! 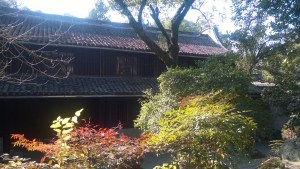 I was really relieved when Nina spent some time with her grandmother and grand-auntie and great grandmother, without drama. After her dramatic (or traumatic) experience with daycare after our RTW, she became so clingy to us, ALL THE TIME, and the whole family became so exhausted. It became so worrying for us that she would never be able to adapt to a new environment without us. I knew that we had to first make a new environment / new person feel safe to Nina before she would even attempt to interact with the rest of the world. But we couldn’t really try in Sydney as we don’t have any extended family around and we don’t want to traumatize our friends. So in Ningbo, after a few days living with my mum/sister’s family, I knew that she was becoming comfortable. Then one day I told Nina that I had to go out to buy something and she would stay with Waipo (grandmother), and I will return shortly. She nodded her head. I expected some change of mind when I reached out to the front door … She went to the door too … But just to open the door for me! I left. And went back after an hour or so, hearing that she was happy all the time. 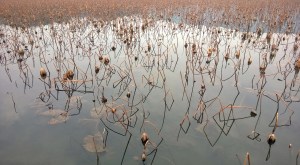 We then went even further. I decided it was a great opportunity for me, and for Nina, to spend a night apart. I went to spend some much-needed ‘me’ time with a dear friend in a heavenly city of Hangzhou (1.5hours train away), and Nina stayed behind with my mum and auntie’s family. It turned out to be just uneventful, for Nina – the best I could ask! Although I attribute some of the credit to the mental preparation I did with Nina (I described to her multiple times exactly what would happen during that day and the night), I know in my heart that Nina is also learning how to respond to a world without her parents. It’s so reassuring. 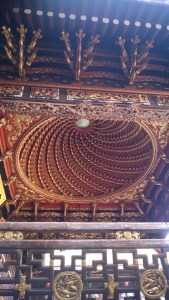 Throughout the trip, I was also a bit surprised by some of the differences in adults’ approach to children (It never became so obvious to me). In Sydney, whenever an adult wants to offer some food (fruits, candy, etc), he/she will ask the parents first if it’s ok to do so. In China, however, people just offer it. They mean well of course – they are trying to be nice to kids. Sometimes I would say no (for various reason, for example I don’t want Nina to eat candy all day long), that person would actually insist and even try harder for Nina to accept. Most of time I just couldn’t bring myself to say no. To say no is really hard – it could be interpreted as disrespect, causing the other to lose face, or simply being rude. To say no all day is exhausting. Juice? Chocolate? Fruits? Candy? Biscuit? Nuts? Cake? Coconut juice? Popcorn? Beef jerky? So after a few days, I just decided to give up on Nina’s normal meal & tea time routine, and leave her appetite to be guided by her desire, for as long as we were there! She ate an incredible amount of things … fortunately she still loved her meal. 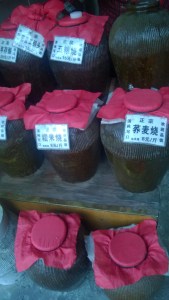 Nina was a constant source of interest for passers-by when we were out and about. There was no single day passing without me having to answer the question ‘oh is she a mix? where is her father from?’.

Despite the cold weather in general, we were lucky to have a few rather warm days and even blue sky (!), and we made the most of it: visited a few beautiful wood-structured old mansions, a 5-century-old private library (one of the oldest surviving libraries of this kind in the world), climbing a mountain, seeing one of the biggest (and perhaps most chaotic) fishing port in action. And of course, we had MANY banquets, and banquets, and banquets.

Most important of all, Nina and I got to spend a lot of time with my family including my grandmother of 92. It’s really a blessing. 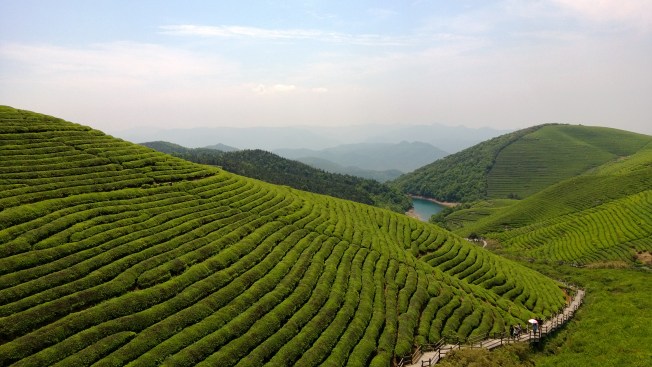 We were in China (Shanghai + Ningbo my hometown) for 10 days together end of April/beginning of May. It was Nina’s first trip to China, and Nicolas’ & my first trip back since more than two years ago. I don’t know what Nina thinks about the trip, but I felt that I rediscovered the cities that I thought I knew.

To start with, there are in fact quite a few nice and well maintained parks in both cities, some of which were well equipped with playground and facilities for kids. I never paid attention to those kind of things when I lived there, thus took the easy (and obviously wrong) assumption that they didn’t exist.

Pram is useful but only in limited areas. There are simply too many stairs and steps and not enough ramps, most of time. One ramp that I delightly encountered led us to … a wall. No wonder there aren’t many prams out there on the street.

Most metro stations are underground in Shanghai with multiple entries/exits (some big stations would have up to 16 entries) but rarely are there lifts or elevators. Good luck with a pram and a 12kg child (plus shopping bags)! Once you do manage to get down the looooong flight of stairs (by carrying the pram AND the child), it’s almost guaranteed that the pram would be stuck in the gate (the type with three rotating bars, is this the way to describe the thing?) so it involves calling a security person and negotiating. So I learnt to carry the pram over my should when exiting.

I didn’t expect parents’ rooms, but I didn’t expect either it’s nearly impossible to find a place to change nappy, decently. One morning Nicolas was with Nina alone (as I was working) in a 6-floor ultra modern high-end shopping mall, and time came to get the nappy changed. Nicolas managed to find ONE place to change nappies in the entire building, and that place was … inside a female toilet! Nicolas, being Nicolas, called a security person to clear the toilet and guard the door while he went inside to change the nappy. That was his first (perhaps last) trip to a female toilet. So is it a sign that men are not expected to change nappies in China (I already have a male friend who claims that he’s moving to China for no other reason but this)?

Other than that, Shanghai and Ningbo were both really lovely. We were lucky with weather – sunny, warm but not hot, with blue sky most of the time (touchwood!!). Food was incredible, as always, and too much, as always. Family were delighted to see Nina for the first time (everyone except my mother of course) and sad that we couldn’t stay longer. Friends gathered together – I saw quite a few university and high school classmates whom I haven’t seen for more than 10 years. Where did time go?? Everyone, including strangers we met on the strett, was friendly with Nina with waving hands and smiles. We even managed to do two day-trips, one to my maternal grandparents’ native village (high up on a mountain with an amazing view down to the valley), and the other to an incredible tea terrace plantation (where I took the photo of this post).

And – what a surprise -I also noticed some differences in child-raising.

Nina generally has more clothes on her than her daycare mates here in Sydney (her dad Nicolas doesn’t like being cold, so just you know), but she was definitely much less dressed comparing to babies/kids we met on the street in China. It was  a day for t-shirt, and many (in fact most) babies were in their sweaters. No wonder why my mum always told me to put on one more layer for Nina.

Family were amazed that Nina rarely cries when she falls. She usually stands up on her own. In China child is expected to cry and get parents’ help to get back up. I’m glad Nina is not too Chinese, for once.

I’m amazed by the fact that children as little as just over a year do not wear nappies anymore. I knew in the theory, of course, that Chinese toilet train kids very early, but it’s still incredible to see that Nina was the only toddler with nappy in a playground with other 20+ kids, many around her age. I need to hire a Chinese to help Nina with toilet training!

Nina is a real Chinese when it comes to food. She loves noodles, dumplings, 大饼 (one staple street breakfast, sort of pancake cooked by sticking to a hot steel stove), 油条 (another staple breakfast, deep fried dough stick), soy milk, beans (and more beans pls!), seafood, and … really everything that came her way.

She also adapted fairly quickly with time difference and change of sleeping environment. After a few days, it was easy to put her down to sleep, much like back at home.

Dare I say it, my mother was fairly impressed with our parenting skills (!!!!!!! it deserves as many exclamation points as I care to type!!!!!) as she used to say that I would be hopeless … As a matter of fact, as Nicolas and I are so used to caring for Nina all by our own, we had to remind ourselves that my family would love the opportunity to feeding her, cuddling her, playing with her for a few hours or so.

Alas, when it comes to language, it’s still too early to say (hey, Nina doesn’t speak a word still). But I am quite confident that she understands as much Chinese as the other two languages. Evidence? I asked her to go fetch her shoes and come sit down in front of me to help put her shoes on, all in Chinese. And she did. I was quite impressed.

As it was time to leave China, I could only say 回头见，中国。See you next time, China.