One of the major hurdles for multilingual upbringing is about how to help children feel the ‘minority’ language is actually useful AND they can be proud of the fact that they are able to speak it, instead of being embarrassed. A few things that generally help include building a social network that allows the child to interact with other speakers in a natural setting, and travelling – or living even just temporarily -back in the native country.

But beyond parents’ efforts, there are other elements that play important roles in – positively or negatively – how the child would feel about the minority language(s), including particularly how the minority language is perceived by the country/community where the family live in. Is the language respected? Is it perceived privilige or rather neglected or unimportant? Is the language linked to a country that is generally perceived positively, neutrally, or eyebrow-raising-ly (is there such a word btw?)? All these – through people’s reaction in one wway or another – will certainly leave a mark on how the child would feel about speaking the language, and accordingly their willingness and capability of speaking the language.

Here is a story that’s shared by my friend H.X who lives in Sweden, which I think somehow illustrates the point above.

I talked to a friend of mine from Ecuador about her “success” in teaching her kids Spanish. She complained that it was very tough from time to time, and kids understands what she says but refuse to reply in Spanish, as they know mommy knows Swedish perfectly well. When her parents come to visit, kids insist to speak Swedish to them as well, which makes her very frustrated. …

So what does it mean for Nina and us? Here is my guess –

– French in Australia is one of the popular languages to learn at school for kids, and France (or Europe in general I guess) is considered as romantic and beautiful by Aussis, so French speaking kids perhaps are less likely to feel embarrassed. In fact, I often encounter ‘Wow you speak French’ reaction and those who have learnt French in school would generally make an effort to try to say at aleast a few words in French.

– Chinese is a rising star of the foreign language in the country, and more and more people recognize the value of speaking this language in terms of future employability & opportunities, although I think still it’s perceived by many as something too different, too difficult thus too far away from reality.

If any Aussi friends read this post, please let me know what you think of my guess 🙂 if you think differntly, do shout!

P.S. something funny a friend posted on facebook. I guess there is some craziness in every language, and here is what’s in English … 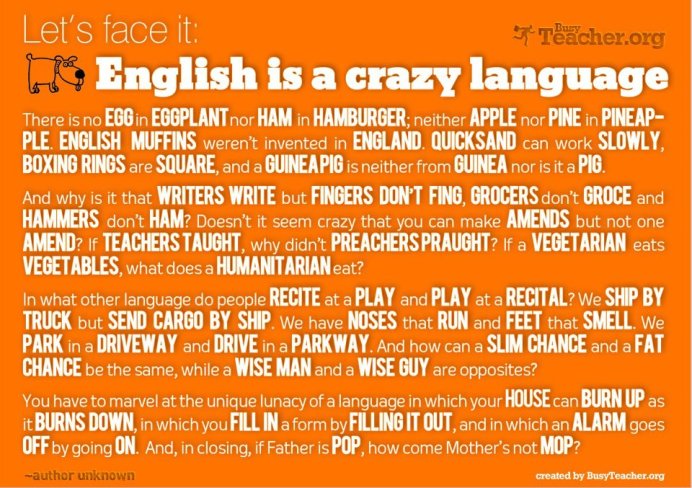