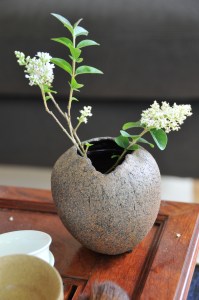 I speak all three languages (Mandarin, English, French) in which we are raising Nina, although we adopt OPOL (one parent one language) method at home – I speak Mandarin with Nina, and Nicolas speaks French with her. Being a native speaker of Mandarin I am certainly the biggest source of regular Mandarin input for Nina. And I am proud of that.

However recently I have been thinking if my own capability of speaking three languages actually has, ironically, become an obstacle in Nina’s capability of learning them, especially Mandarin.

At about 2 months shy from turning three, she understands Mandarin perfectly, but she doesn’t speak as many Mandarin as French (French currently is her strongest language especially when it comes to verbal production). If she spends long enough hours in a day just with me, or if I prompt her to speak in Mandarin for certain things, she would produce more Mandarin. Lately I have also learnt some techniques in having her speak more Mandarin (or in any language really). However left alone, she seems to use French sentence structure as her base of constructing verbal language generally.

That got me thinking: what if I didn’t speak/understand French at all or just at very basic level?

Would then she learn, over time, that ‘mm mama doesn’t understand me, so I have to find a way to let her know that I want to eat that ice-cream’, so that would leave her no choice but to communicate with me only in Mandarin?

Would I then stick to reading just Mandarin books, as I am not capable of reading books in the other two languages? Currently I would pretty much read whichever book that she asks me to or that comes in handy. And I have dilemma on which language to read the books in, which is an ongoing dilemma.

Would it then also change the language dynamics in the whole family, esp that Nicolas and I would speak more Mandarin than anything else, so Nina would get a lot more Mandarin input overall at home? Currently we speak French between two of us.

These are of course just theoretical questions that I will have no way to find out the answer – and I am not even attempted to try by pretending that I don’t speak the other two languages well enough. I enjoy many advantages of being trilingual – including seeing the confused faces of strangers trying to figure out my accent 🙂 But perhaps like almost everything in life, it also comes with a price.