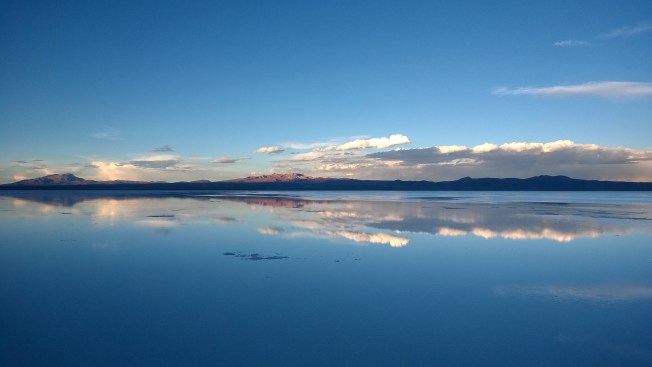 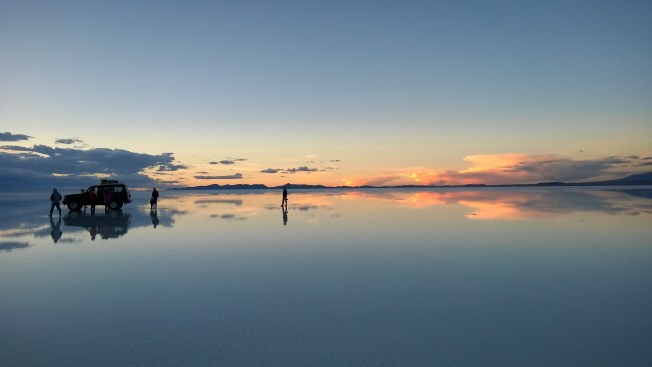 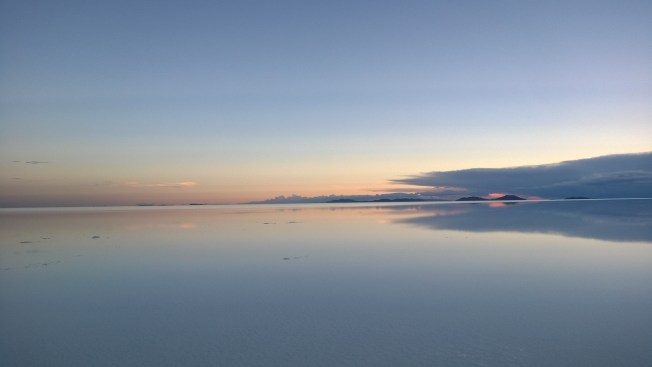 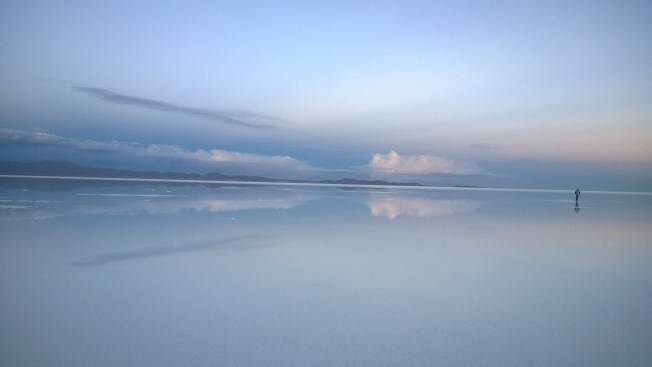 Salar de Uyuni!! While choosing the photos for this post, I realized it’s an almost impossible task, as there are so many photos that even I like myself 🙂 All these photos you see here are straight out from my mobile phone (I love my Nokia 920) with no retouching at all. We have many in our Nikon but I leave the task of selecting those photos to later ..

We took a day tour with other 4 tourists (one Korean guy, 3 Japanese girls) with an agency whose main customers were Japanese with a bit of Chinese/Asian. The only reason I chose this agency amid other numerous agencies was that they offer additionally the sunset on the wet part of the salt lake(while others all came back well before sunset). In retrospect it was such a wise decision as the wet part was easily the highlight of the day.
At 6:30am I woke up to find an amazing sun rising cloud from our window. After all there was positive climbing extra 3 floors.
At a leisurely 10:30am start, we left the dusty town of Uyuni,,with all other jeeps tours … Funny that they unified the departure time. Before the actual Salar, there were 2 other stops: train cemetery (fun to climb on trains, met two guys biking their way down from Alaska to BsAs, quite an adventure!), Colchani (so called salt factory, where the only thing open were a so called museum which was actually nothing more than a shop with a few sculptures made from salt, and many shops selling souvenirs).
Then off we went, into the immense Salar de Uyuni! 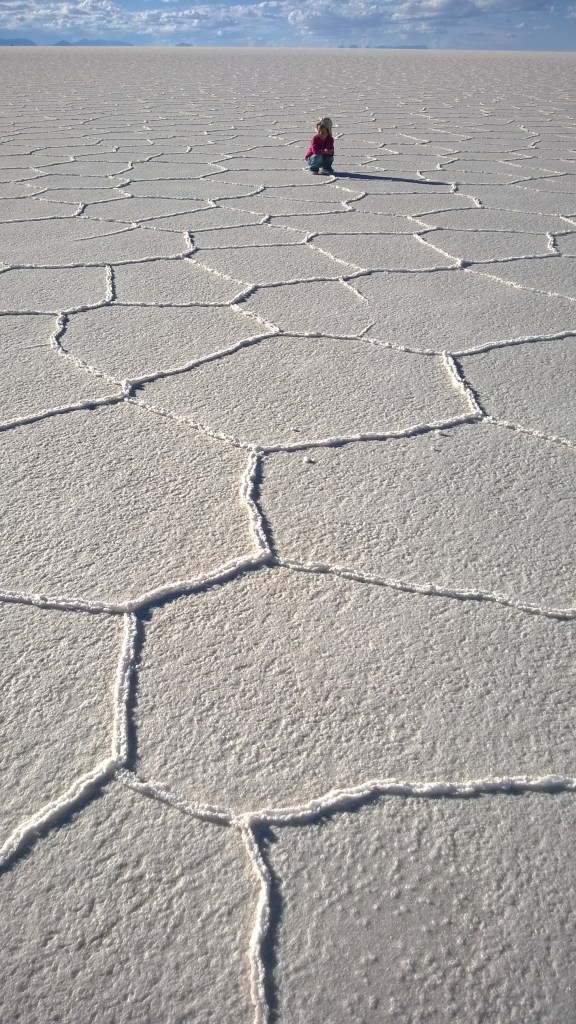 Such a surreal experience! It’s a more than 12,000 km2 of solid salt, sitting at 3,600+ m above sea level, with depth ranging from a few meters to more than 100metres. Our jeep – an old land cruiser – cruised through, salt after salt after salt, nothing else, for almost an hour.

Then a hill showed up in the horizon almost out of nowhere, with giant cactus all over it. Incahiasi Island was its name. There on its foot we had out lunch (salad, fried chicken, coke, banana). Then we set out to climb. It’s worth every bit of breathless steps. Nina was not well ( we later realized she perhaps had diarrhea after 3 dirty nappies) so we couldn’t all climb up to the top together. Nicolas and I took turns to the summit – oh what an eerie feeling – 360 degrees around, all that you could see was just white salt, with very very faraway on the horizon a few gentle hills. Then on the island, the only island In the entire salt lake, there were so many giant cactus that I wonder where and how they showed up and survived. I wish I could stay longer on the top to take in the view and really feeling the strange feeling.

Then we set off again to the seemingly endless salt lake. After some time our driver France(!!) stopped in the middle of nowhere n a perfectly unspoiled patch of salt, he said it’s time for some fun photo. And he meant it! He’s apparently mastered this. He took out some props (a few toy dinosaurs, a water bottle, a long sock etc). The three Japanese ladies were the models, letting France orchestra poses/actions/moves for some incredible photos using perspectives. We joined a bit but most of time took photos on our own.
The geometric pattern of the salt lake was naturally amazing. Nina had fun walking along the pattern, and also broke the small patches of salt off. I was sleeping on my tummy sometimes for fun or photo, oh the untreated salt mas very coarse for sure. Then the sun started to go down, we jumped on the jeep towards our last destination to watch sunset, with a very brief 10min stop in the salt hotel (a hotel made entirely out of salt. I wish we could have stopped a little long so that I could visit a bit inside, but well sun wouldn’t wait). We also changed into the boots that were provided as part of the tour, they even had size for Nina. 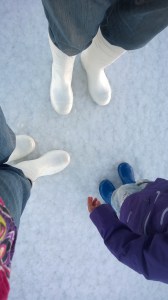 The jeep slowed down when there started to be a shallow layer of water on the salt. This was the water not yet evaporated after the raining season (supposedly ended just in March). France really knew what he was doing. He looked around, trying to find a suitable patch to stop where there would be good reflection of sunset in the water. It was not a perfect sunset because there was just enough clouds at the horizon covering the setting set. But what an extraordinary view to see every colour and form reflected on the water, and the sky and the earth seemed to merge seamlessly. And we were all just tiny part of this grandeur unity. 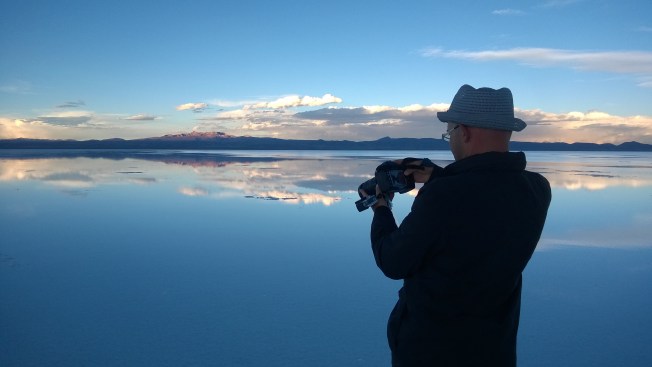 With the boots, we could walk around, but every one seemed to slow down, mesmerized by what we saw. Cameras worked hard – every single angle and moment looked too nice to miss. 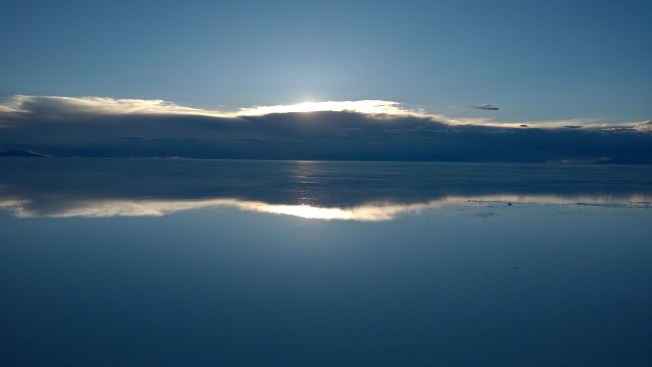 An hour or so passed by quickly. Sun set magestically. Moon was already high in the sky. Time to head back to Uyuni. Nina unfortunately was very grumpy, crying constantly, not able to sleep although she was visibly tired. At moments like this i asked myself if it’s too much for Nina and we as parents were too selfish. Nina went straight to bed after we came back. Nina co claimed he wasn’t hungry for dinner. I decided to go out food hunting myself. Crossed the street to the local restaurant as recommended by the lovely travel agency lady. They were all offering similar things – with parrillada grilling outside the resto and basic seats insides. I randomly walked into one and ordered what seemed to be the most popular – cotillas (griiled ribs) with rice and salad. I was astonished that the big meal costed only 8bol (1USD = 6.9bol)! No wonder she called the type of resto we normally went to and paid at least 50 for a similar plate the tourist resto.